Warning: Invalid argument supplied for foreach() in /home/tylunited/public_html/adlinteractive.com/wp-content/themes/themify-split/themify/class-themify-enqueue.php on line 1551

In today’s blog I decided treat you all with something wonderfully strange. Somewhat controversial but all in good fun, we uncover some of the world’s weirdest, odd and absurd board games ever published. Now, I’m can’t validate whether or not they are from big or small publishers, but if it’s been published and played it’ll […]

In today’s blog I decided treat you all with something wonderfully strange. Somewhat controversial but all in good fun, we uncover some of the world’s weirdest, odd and absurd board games ever published. Now, I’m can’t validate whether or not they are from big or small publishers, but if it’s been published and played it’ll probably be on this list. This isn’t a top 10 list of games, but a shortlist of games I’ve come across in real life or on the intratubes. I have a few odd ones in my collection, but after a little digging on the interwebs I found a lot more. In no particular order, and without further adieu…

The weirdest board games I’ve come across 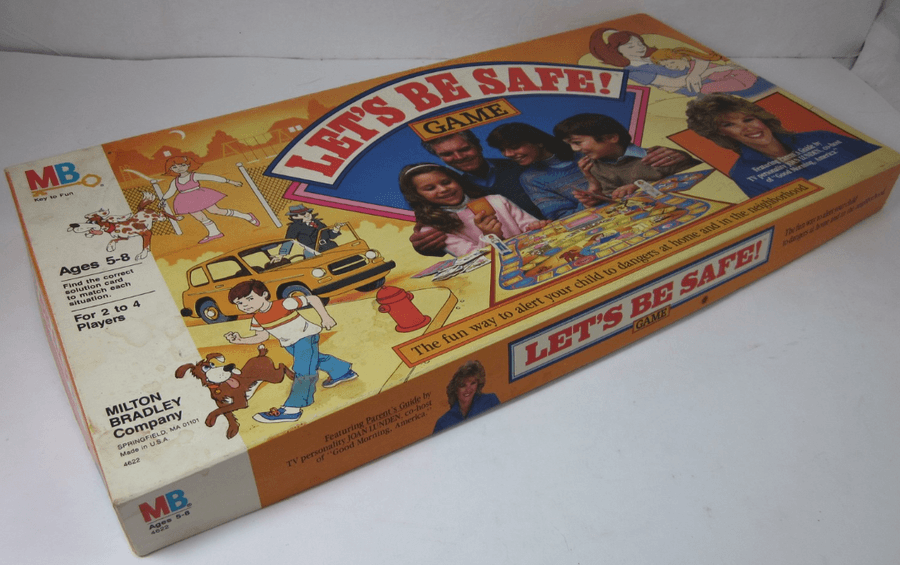 Let’s Be Safe Board Game

On the surface it seems harmless, and it is. It’s a matching game where parents play with their children. It gives the parent the opportunity to discuss sensitive subject matter in a fun, relaxed environment. Topics like talking to strangers, how to behave around adults and other children, spotting potentially dangerous situations and how to act accordingly. The games moto, “If every family played this game, we’d all feel a lot safer,”  is a testament to the times but is timeless in it’s methodology. We’d all be better if we all taught our children how to identify and deal with hardships in life. But, it’s a game at the end of the day so how many kids are REALLY taking in the lessons. Jimmy just wanna beat Sally and Mom. If not taking candy from a stranger is the path to victory, then no candy for Jimmy. 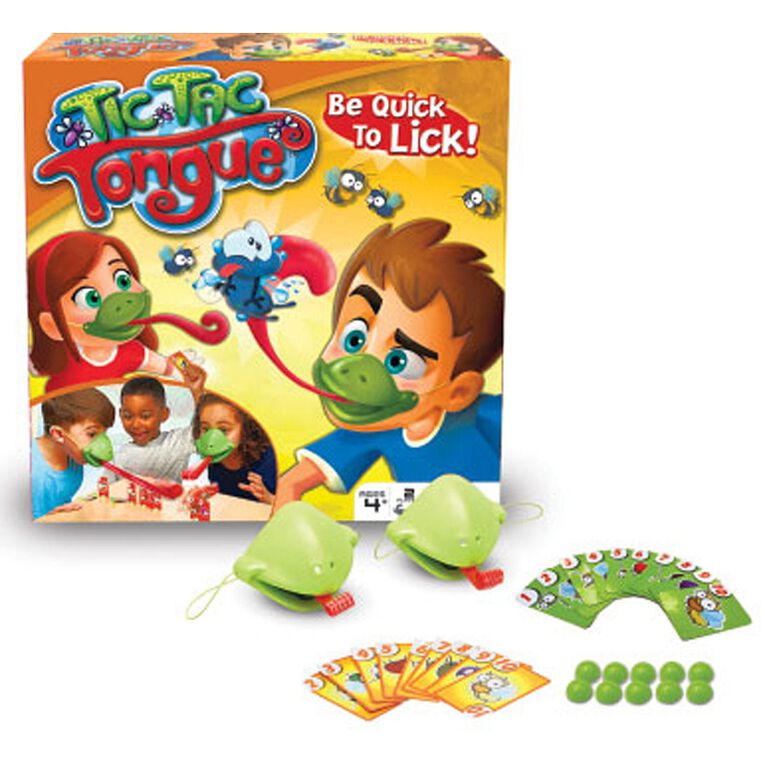 As odd as it is cool, this game has all the makings of an entertaining evening at the dinner table. I think it being on this list is a bit of a joke, and there are weirder games, but I like this because it’s so outside the box. Someone was really thinking (drinking) when they presented this one. Using a prosthetic tongue, players try to knock down targets before their opponent does. You and your opponent face off as chameleons, yes, not frogs. At a glance I guess one would be confused. I was at first. Odd, yes, weird, not really. Guaranteed laughs all around, this game is still available at retailers like Toys R Us and Amazon. A great gift for the board gaming child in the family, or for adults when other substances are involved. 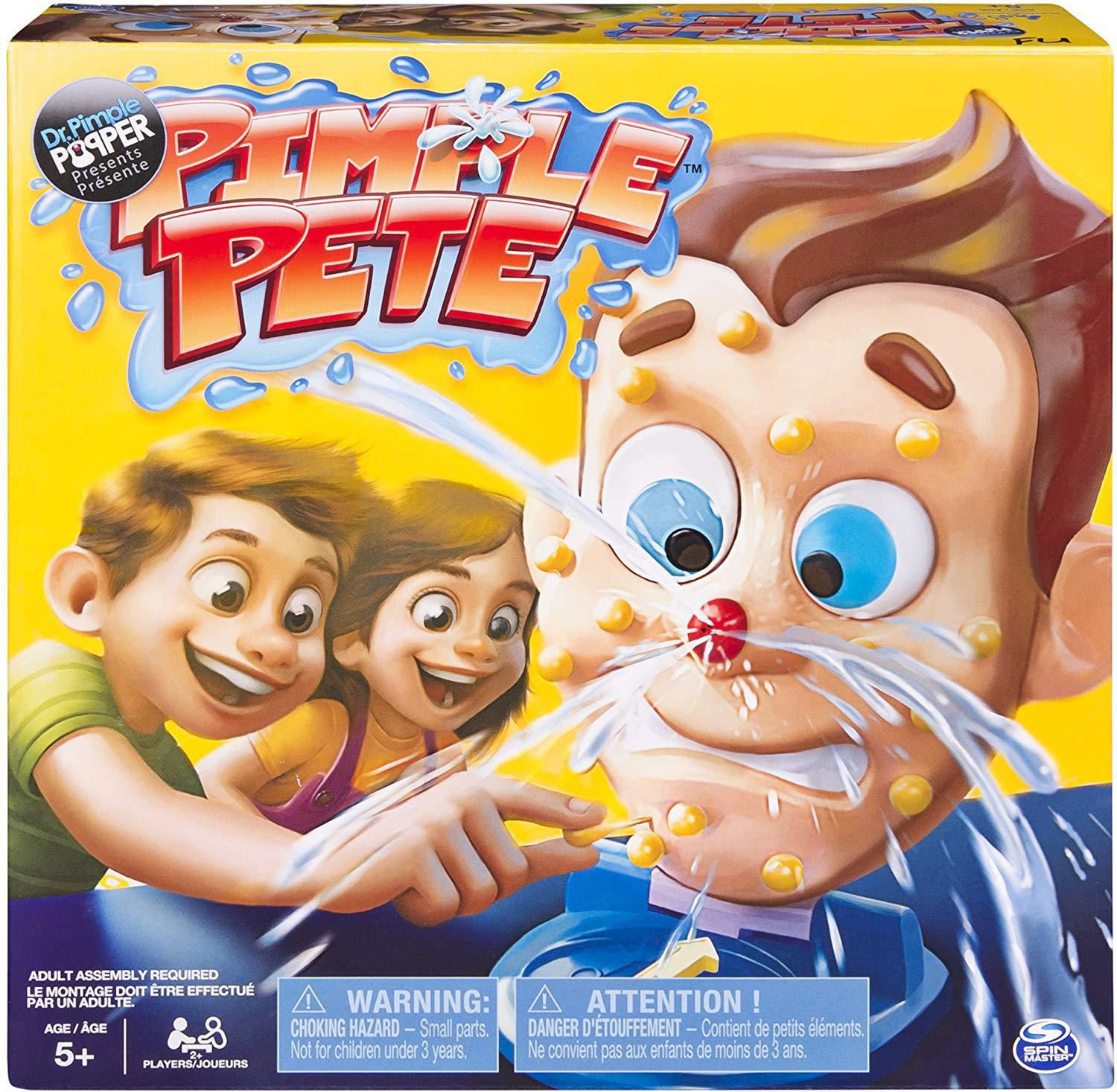 Now HERE we have a odd, weird and “why?!” type of game. Popping pimple and getting splashed with water. *sigh* No reasons other than the shock value I suppose. I think there is some kind of excitement factor that comes with blind choice options. Apparently, squishing, squeezing and popping things is some type of dexterity/fidget fascination that people have. I remember bubble wrap being a thing for me, but now it’s devolved into something a little too gross for my liking. Upon a simple amazon search, there were more of these types of toys for kids… and adults.

Um… What can I say. Bacon for the win. In this weird, but understandably popular theme, you and your family/friends roll and move to navigate Mr. Bacon and his … ?family through a treacherous, winding road of food related obstacles. Making your way through Meatland, you’ll pass through areas like the Mustard Marsh, the Wiener Wasteland and the Sausage Sea. The first one to make it to the frying pan at the end of the trail wins. I guess the destiny of a bacon strip IS to be eaten, so why not be happy when your journey ends with being fried alive and consumed. For the meatatarian or bacon fan, this is a must have. Novelty and entertainment wrapped up in a nice, greasy, slightly crispy, bacony package.

Odd, eccentric, and definitely different from a lot of games out there. Produced in the mid ’90s, this crank based game features a very interesting theme, executed through simple mechanics and a random factors. What really sells this game is the commercial. If you’ve never heard of Skworms before please check out the game commercial. Parker Bros outdid themselves with this one. There were a lot of mechanical based games created back then, and now with my understanding on the costs involved in molded plastic games (like Mouse Trap, Fireball Island, Jumanji/Zathura, and Sorry/Trouble to a lesser extent). Kids also love squishy gross things. This has been a trend in toys and games for over 30 years now and it’s not different today than it was in the ’80s. For a game that seems so simple there is an interesting approach and winning condition.

WTF?! This is an actual game, and not just that. This game has been licensed a few time AND even had an updated edition created. Apparently, Doggie Doo models responsibility in a fun (and gross!) way and “is America’s favorite dog and is for 2-4 players, ages 4 and up”. The level of confusion and intrigue battle for reasons in my mind. Again, going back to Pimple Pete (game above), this type of game caters children who enjoy gross things. Gross things have been a staple in kids toys for decades. I shouldn’t be shocked, but every time I see games or products like this I can’t help but wonder “what parent in their right mind would buy this AND find it educational or entertaining??” *sigh* And if that’s not enough, there is a whole slew of games that fall into this genre, as shown above and below. A smorgasbord of trash for you and your family to enjoy. Okay. Now, I don’t mind this game at all. I don’t only have negative things to say about weird games. This one falls into the endearment side. It seems super fun for kids and adult-sized children who like a good dexterity game. After watching the commercial for this, I can see the pure entertainment value. Odd, yes. Weird, maybe. I’m all for dexterity games and this would actually be one I would have at home. Give the commercial a watch and judge for yourself – it’s a wonderful time to be a child.

Another one of those weird family fun games, Feeley Meeley has a lot of innuendo but at the root of things it’s just harmless entertainment. The premise of the game is to place a bunch of objects in a box, flip over a card, then take turns feeling around to pull out the object of the picture on the card. Simple enough, but adults always take it too far. You know, the perv stuff that makes this more than just a kids game. What’s genuinely interesting about this game is it’s not that unique and not that weird, but has ended up on many awkward and weird board games lists on the intratubes. I think I’d smash at this game. What would make this game even harder is to have a ton more things in there that share the same shape but have subtle textures, or incorporate timer and punishment, or put gross things in there. I think the gross game things is already done – Google Halloween Mystery Feel Box.

Ooze, check. Gross factor, check. Monsters and or aliens, check. This game has all the makings of 80s kids gaming gold. Making a board game where you have to avoid the NPC monster is cool in itself, but as soon as you add the ooze, WHAM!!! Whole ‘notha level. I can honestly say that this game bares no interest for me. Maybe seeing someone playing it, sure, but as for playing it myself? I think I’ll pass. I don’t know if it’s the adult in me, or the kid in me that doesn’t react to gross factor. Nothing about this interests me. Skworms on the other hand (above) would be something I’d like to experience at least once. Mechanically sound, moving both your player and the monster in a turn. Two part play, first making your way to 1 checkpoint, then trying to flip over the monster. Time based play, moving with haste and strategically positioning the monster to make it hard for other players. So many things happening in a seemingly simple spin and move game… with ooze. As the last entry in this post, it’s definitely worth a review.

I thoroughly enjoyed investigating these, and many other, weird board games. Never discount the strange ones. You never know what might pique your interest. I’ll leave you with a few honourable mentions and links to some other weird and awkward game lists. Enjoy.

26 Funniest and freakiest board games you can buy

12 Weirdest board games ever