The vortex that is my mind is a strange and wonderful place. Full of fantastical creations and lovable concepts. The only problem is waking up.

I was graced with the opportunity to not only recall, but also record on digital paper, a game I played in dream-state. Tuesday. Early morning. Woken up by the urge ‘to go to the washroom’, or as my Google Assistant would fail to transcribe “crucibles to Washington”. Just prior to that I was in a semi-conscious state recounting  a game that I’m playing with three other people at some undisclosed location. Like in many other dreams before, nothing new to me. I’m fairly lucid throughout my dream and picked up on the fact that this seemed like a pretty cool game. As I felt myself becoming conscious and my bladder now forcing my hand I quickly started to recap how the game looked and how it was played. This experience may be common for some of you, and if so you know how it usually goes. As my brain tries to cram abstract concepts to my frontal lobe a lot of details were missed. Kind of like jamming a peeled melon into a coffee cup, only so much will be retained. Odd analogy, but we’ll go with that for now. Of the information I happened to retain simple concepts like game pieces and board layout were pretty definitive. Basic concepts like game mechanics and order of play weren’t so memorable. I had to do a little thinkering.

Down the rabbit hole

For me, game-inspired dreams are still somewhat of a mystery. I can understand the why but I’m still figuring out the how. I still can’t pinpoint when. I’m always thinking of creative mechanisms in applications. High-level concepts for everyday things and everyday experiences. It’s not just for game design but creativity in general. That morning’s dream-state recital began roughly around 5:45 a.m. I kept on trying to remember the look and sequence of play over and over while in the washroom. Then quickly bolted back to my nightstand to grab my phone and started creating notes. I went straight to a notepad and my stylus took helm. I started drawing out what I remembered. Sometimes a few scribbled lines here and there were worth a paragraph of incoherent (and often misspelled) text. As I drew, I started to remember more concepts of game play and, eventually through the art of interpretation, started to construct game mechanics that made sense to the draft. Then designer divergence kicked in and I was literally of two minds on how to tackle this concept. From there it was an hour sitting on my bedside, in the darkness of the morn, cramming as much ideas from my head into little notes on my phone. Welcome to my life. 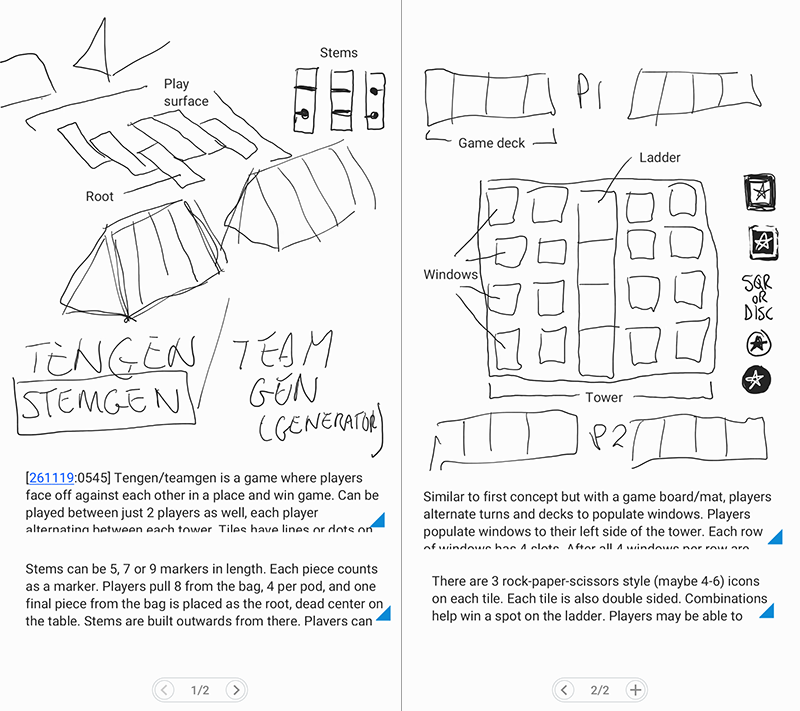 Curse these hands for not drawing, typing or moving fast enough to keep up with my brain. Or, curse my brain for moving too fast for my hands or words to express such wonders. Yes, I could keep audio notes but I find sometimes they are filled with gaps of incoherent babble. I’ve done it in the past and I often use it when I find writing takes too long. Or sometimes after saying something the idea changes and I have to remit the previous thought. I usually voice-to-text my notes so I can control what’s said, taking breaks at punctuations and adjusting on the fly. Speaking softly so I don’t disturb my wife proves to be a challenge sometimes so I just go sit on the toilet lid or in the office. Pfft. Going back to bed? I wish. Brain is now almost at full throttle. Blessing and a curse, I tell you. If these game concepts ever take off expect a DevLog for them. I do really like the ideas. They may even reach my Game a Week campaign I’m running over on my FB page. Ciao for now.

COVID shut down the world and my drive