I have a love hate for Monopoly. Probably one of the most influenced (copied) game format out there for the consumer gamer. Whether you love it or hate, odds are you’ve played it and enjoyed it.

This is a long one so get a tea/coffee, grab your salt shaker and park your keyboard warrior ego for a few moments.  I have a story to tell.

I have a love hate for Monopoly, as do many, but my issue with the game isn’t really about the game at all. It lies with the fact that Monopoly, as a whole, is greater than the sum of its failures. Any modern game designer or theorist will babble on about PAPI and the equilibrium to the game. How Monopoly falls short on the core concepts, but excels at teaching how the capitalist concepts molded modern society (in the US at least). How you waste money, abuse power and ultimately bully your way to victory. How luck can work in and not in favour – Luck has no bias. How house rules have warped a generally boring player experience for the “better”. The National Post has a very interesting article on why we continue to perpetuate such a loathsome board game. Give it a read when you get a chance. This article isn’t necessarily about Monopoly in history. It’s more about how it’s spun off many favourable, and in one case a very unfavourable, variants.

Monopoly has and still has a list of spin-offs using the ‘Opoly’ form factor (licensed and unlicensed). This has definitely kept a tired and outdated game in fashion for so long. People don’t always remember the game but they do recall the feelings and memory of playing the game. I think a lot of it’s charm comes from the experience more so than outcome. Win or lose, you were always involved, always righting against the odds and always fretting where you will land. Paying up is such a bitch. All of this made for a foundation for many themes people found to be more exciting than playing ‘Get Rich – The board game’.

12 Shit Monopolies that can’t possibly exist, but they do

Some of the fun little opoly games I’ve found on my travels.

Hasbro has capitalized on the fad of custom Opolies with their own spin-offs. I’d say the majority of the fun comes from the unlicensed, homebrew games. Ones created by those who love the format and slap on a wacky theme. Even when Monopoly was at its height (which varied with each generation) it was always seen as a entertaining game that provided hours and hours of fun for those willing to customize the experience.

There is something to be said about releasing an ‘Opoly game that actually annoyed people. It was such a big deal that Monopoly released a statement calling out all the haters while still being respectful. Yeah, I totally see it as a

“We created Monopoly for Millennials to provide fans with a lighthearted game that allows Millennials to take a break from real life and laugh at the relatable experiences and labels that can sometimes be placed on them.”

(conversation depicted below is purely fictional. Any resemblance to actual people and actual things said are purely coincidental and not to be take as truth)

Lunch Room:
Nixon, Cresta and Jo are sitting around reminiscing about their childhood when Jo brings up that her mom found the old Monopoly board in the cellar with a bunch of stuff being packed up for good will. Jo remembers playing the game when she was younger.

Jo – Oh. My. God. The amount of times my cousins would beg to play every time they came over. I got sick of that game so fast.

Cresta – I know, right?! I only played it when I went to camp. I was like, I don’t know, like 8. The counselors would either break that out or Snakes and Ladders or Checkers. Games back them aren’t like they are now.

Jo – Totally. There are so many interesting copies of Monopoly out there. You know, the customised ones with crazy themes.  I played this one called Weedopoly once. Absolutely hilarious when you’re a little high.

Jo – Oh my god. Totally. The Presidential election alone would be a theme for the game. Become the next president. I would play that game.

Cresta – How about Farmopoly? Or Caropoly, based on the automotive industry? Those concepts have range. Anything to do with managing money and fuking over the next man.

Cresta – How about a Monopoly around having no money. The Oppositopoly. Like, my life. Just burning cash as I run around, existing. Jesus.

The next day a very lengthy email is sent to Greg, the 25yr veteran developer over at Hasbro. He has a laugh and dismisses it as a joke. It is not a joke. His manager is involved, then their superiors, and holy bujesus it’s green lit. Monopoly for Milliennials is produced. Greg smacks his forehead, the trio all high five each other over lattes and scones.

‘Monopoly for Millennials’ causes outrage among Generation Y on Twitter

Oh, you know Hasbro had to do it to ’em. I kind of get why certain people would get up in arms about it, but enough so to berate the brand for poking fun at a very common (and understandable) mindset?

And the second in a supposed slue of parody Opolies from Hasbro, here comes Ms. Monopoly.

Bah. I can understand if they made a game themeing the American Dream – oh wait! That IS what Monopoly is. How about living in a communist country? Oh wait! That exists too. 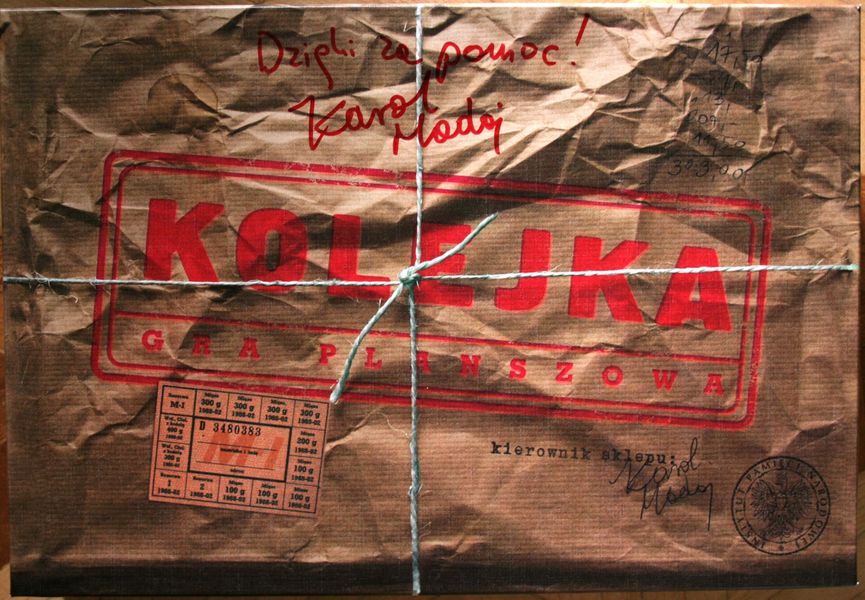 Standing in queue is what you do. The game generally describes the Poland at the tail-end of the Communist era. Play is simple: players send their pieces different stores on the board to buy the items they require. The trick is you don’t know what items will come up in what store and certain things may be short on supply, therefore you may never get it. Product deliveries are uncovered (by turning over face down cards) and there will be only product for the lucky few who happen to be in line when deliveries drop. Players can use certain action cards to manipulate their place in line, like “Mother carrying small child”, “This is not your place, sir”, or “Under-the-counter goods”. It’s quite interesting and I think for anyone who loves an Opoly spin-off, though not directly a copy, would like this game inspired by such.

Read more about The Waiting Game In this Hasbro Official spin-off players move around the board working together to make a better community. The new cooperative game play leverages teamwork to and , in a way, forces players to succeed together, but no one said teamwork was easy. Flipping over Chance cards presents players with controversies and complications they have to work out. Issues like annoying neighbors and failing community projects, you’re constantly voting to shake things up. The goal is to contribute all 10 of your chips to win the game, unless the Community Fund runs out of money and everyone loses. Good luck with that. To “do or die” by no power of your own. There is always a catch.

It’s okay to poke fun at the rich but not the poor. If you think about it Monopoly kind of does both. The whole concept of Monopoly is to benefit from setting up a financially stable set of assets. Basically, get rich off the backs of others. If that’s not the capitalist America the world has come to know and love/hate then why make such a big deal about these spin-offs? I guess everyone’s got a right to complain. I know I do, but before this post turns into a segregation of mindset vs. matter I’ll close by saying: It’s just a game. Get over it and find something you love playing. And if you love Monopoly the more power to you.

Just try to keep the board flipping to a minimum.

Time for Change ADLi is not dead